Jesus & Our Culture of Addiction

Alcohol, smoking, drugs, gambling, food, video games, internet, sex, shopping and work have been referred to as the ten most common addictions. Someone put together a rather long list of addictions from A to Z. It would seem that almost any substance or activity that provides some kind of rush, satisfaction, pleasure or ecstasy is now considered a prime candidate for addiction. Thus, almost anyone is now a possible candidate to become an addict.

Addictions often get labeled as either a hedonistic choice or a disease of the brain. In the book, Addiction and Virtue, Kent Dunnington makes the case, using Aristotle and Thomas Aquinas, that addictions are instead best understood as a complex habit. It's well known that people are a sum of their habits. Addiction happens to be a very alluring yet destructive habit. Dunning explores the role of reason and appetite in forming habits, emphasizing that addictions are a complex habit formed as a rationale response to a moral and intellectual crisis.

Dunnington makes a case that addictions are how many people react to the deep longings swirling around in them. Addictions are new to human history, one of the tragic by-products of our Industrial Revolution and Enlightenment. Our uniquely individualistic, hedonistic culture breeds meaninglessness, arbitrariness, boredom and loneliness. As people get reduced to cogs and cubicles in our post-Industrial, Information-age society, and as doubt and cynicism chew away at our certainty, absolutes and beliefs, humans must find a way to cope.

For the Christian, addiction is certainly a sin. And like all sins, it is one for which repentance and forgiveness are needed. But unlike most sins, addiction is in a category all its own, being a complex habit that is more then just a series of bad moral choices or a disease in the neurons. Understanding the roots of addiction in our culture help bring about Christian compassion for those that are addicted. It also helps mobilize Christians to better understand their culture, which will result in more accurate criticisms as well as more helpful solutions. This is where Jesus comes in.

When Jesus entered his culture, there was much to critique. Instead of rampant addictions, he addressed demonic possession. The evils of Empire, the terror of kings, the thousands of crucifixions, the chronic starvation and disease - this is what Jesus confronted. The trauma that filled people, the brokenness, the ache caused by unrestrained wickedness and demonic activity met its match in Jesus.

To all who would listen, Jesus called people to repent, to turn away from the evil, to return to God - for the kingdom of God had come. The sign of God come to Earth through Jesus was evident in demons being powerless before him, being sent away almost effortlessly. Thousands of the crippled and diseased - products of not enough food, brutal wars, and slave labor - found healing and hope in Jesus. Jesus was recognized as a king, the Son of David, the Messiah, the deliverer, the forgiver of sins - and he was a direct threat to Caesar, King Herod, and all others with power who propped up the destructive status quo.

And here we are, followers of this King Jesus, in a culture that fuels addictions. What can Jesus do through his followers in response to loneliness, boredom, meaninglessness in our culture and communities? If the kingdom was still coming into our neighborhoods today through those that trust Jesus - what kind of healing and hope would that bring to addicts?

In the Spirit of Jesus, Christians must be astute critics of culture. But this will only have credibility to the degree that they are honest and humble about how they are both products of that same culture and have also been able to create an alternative society that brings about healing from the more destructive elements of the culture.  Bill Wilson, one of the famous founders of Alcoholics Anonymous, was an alcoholic who found healing and hope through Jesus through passionate and pious Christians. His story of how he became a Christian has been published for all to read.

Interestingly, a recent survey showed that the majority of people who are getting help from A.A. got connected through former A.A. members. Only 1% of the respondents said that their church referred them to an A.A. meeting. Without making too much of this stat, and recognizing that churches are one of the places you might find a A.A. meeting happen, there seems to be a disconnect between churches and success in overcoming addictions. Spirituality infuses the recovery outlined in A.A. Spirituality infuses church...but not in a way that helps fuel healing. Why is this?

This reminds me of another of Jesus' words: "Seek first the kingdom of God and his righteousness, and all these other things will be given to you as well." Difficult words to live by, yet when done so very inspiring - both for those that do it and those who see it.

How do you see addicts? Or do you prefer to not see them? We can be sure that Jesus would see them. And that he would have compassion on them, as sheep without a shepherd. And he would bring them healing and salvation. Addiction is a complex habit, hence it requires a complex, indirect response. It's not that people aren't delivered from their habit of addictions, it's that too few are saved. And it's that the church as a whole too often judges or overlooks addicts. 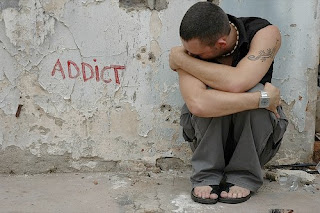 The irony being that we all breathe the same cultural air, and but for the grace of God, they could be you. Maybe if more addicts were welcomed into the church, the church would feel more urgency in embracing a spirituality that brings healing and not just warm fuzzy feelings.

Dunnington's book illuminates the role of virtue and habits from the perspective of philosophy (Aristotle) and theology (Aquinas). These explorations into ancient virtues and centuries of developed thought on the role of reason and appetite in human behavior will enrich your perspective. It will also reveal how negligent most Christians are in regard to habit, to habits of virtue, and to habits of spirituality. Dunnington's insights on addictions as habit and sin will deepen your understanding of how close we all are to becoming addicts.

The loftiest suggestions come in tying addiction to idolatry, pointing to renewed worship of God (not praise songs, but attitude and allegiance) as a way to bring order and meaning to life. This alternative, along with a resulting loving community of Jesus-followers has potential to help nurture more healing for more addicts who refuse to be bored, who refuse to live without purpose, and who will do whatever it takes to avoid the feelings of loneliness.  The difficulty is in the pervasive weak worship of too many churches, the ambivalent communities, and the anemic Christian ministries.

Still, Jesus speaks to all with ears to hear: "Repent, for the kingdom of God has come." And those with eyes to see: Jesus heals as he preaches.

My argument has been that addiction is a habit informed as all habits are, by rationality. And I have been trying to probe the structure of this rationality. I have been trying to display how addiction insinuates itself into the cogitative estimation by supplying order and integrity to an addicted person's life - order and integrity that we as human beings, and particularly as modern human beings, crave.

Addiction, I have argued, operates as a moral and spiritual strategy, carrying out particular functions in the moral life and empowering a person for the pursuit, albeit misguided, of ecstatic satisfaction. This is why I have paid much attention to the constructive and positive potential of addiction and have elaborated little on the destruction and havoc it wrecks. Addiction is mysteriously powerful, but if we fail to ask what the power consists in, then we make it not only mysterious but also foreign.

I have attempted to make addiction less foreign, giving us ways to think about the pull that addiction has on all of our lives. I hope my analysis has shown how near, rather than how far, each of us is to the major addict.
~ Kent Dunnington, Addiction and Virtue, pg 167

Hi nice Post written by you guys. It is amazing and wonderful to visit your site. Thank a ton for such a nice post.