Some say it is taboo to mix politics and religion. Some times that is the case. But not today.

Today is Super Tuesday: 24 states are holding a primary - Tara and I are having fun watching CNN track the races. It's been a great routine, pretty much every Tuesday for the last month we've been tracking and talking politics! Right now Huckabee is making a speech, something he typically does a good job of. But will he do a good job as president...I just don't know. McCain doesn't thrill me, and Romney bores me. Clinton scares me. Obama...I like him, but we don't line up close enough on some key issues. But...

Today is Fat Tuesday: 48 days until Resurrection Sunday, tomorrow is Ash Wednesday and the first day of the Lenten Season. That means that today is the traditional day when you eat heartily, load up on the rich foods and have a good time - because tomorrow is a day of penitence and fasting as we begin the almost seven week preparation for celebrating the Resurrection of Jesus. If you'd like some background on Lent, read this article at Christian History - concise summary and chronology that is helpful. 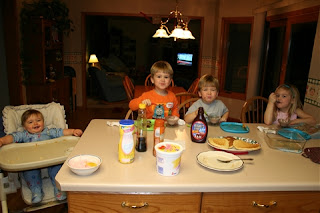 Tara had other plans for dinner, so that left me and the kids to make the traditional fare for Fat Tuesday: Pancakes! There are several names for today: Pancake (Fat) Tuesday is the traditional name for British-influenced Christianity; Mardi Gras is the French translation of Fat Tuesday and is celebrated in Catholic-influenced regions: New Orleans, Venice, Brazil, etc.

We made the pancakes extra rich: three eggs instead of one, four extra spoons of sugar, and then we drizzled chocolate or caramel syrup on top of them. We also had yogurt, chocolate pudding, and frozen cake for dessert. Whew! 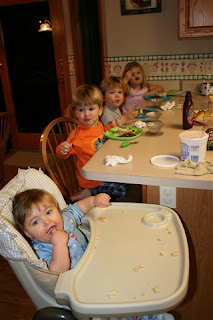 It was fun explaining - in very simple terms - to Emma why we were having pancakes on Tuesday night instead of our regular Friday morning slot. I shared with her that on Ash Wednesday evening, we would have a special prayer we would pray following the routine bedtime prayer. I'm looking forward to introducing my children to some of the rich traditions of the church as we remember and honor the life and death and resurrection of Jesus.
Posted by Tim Hallman at 10:08 PM